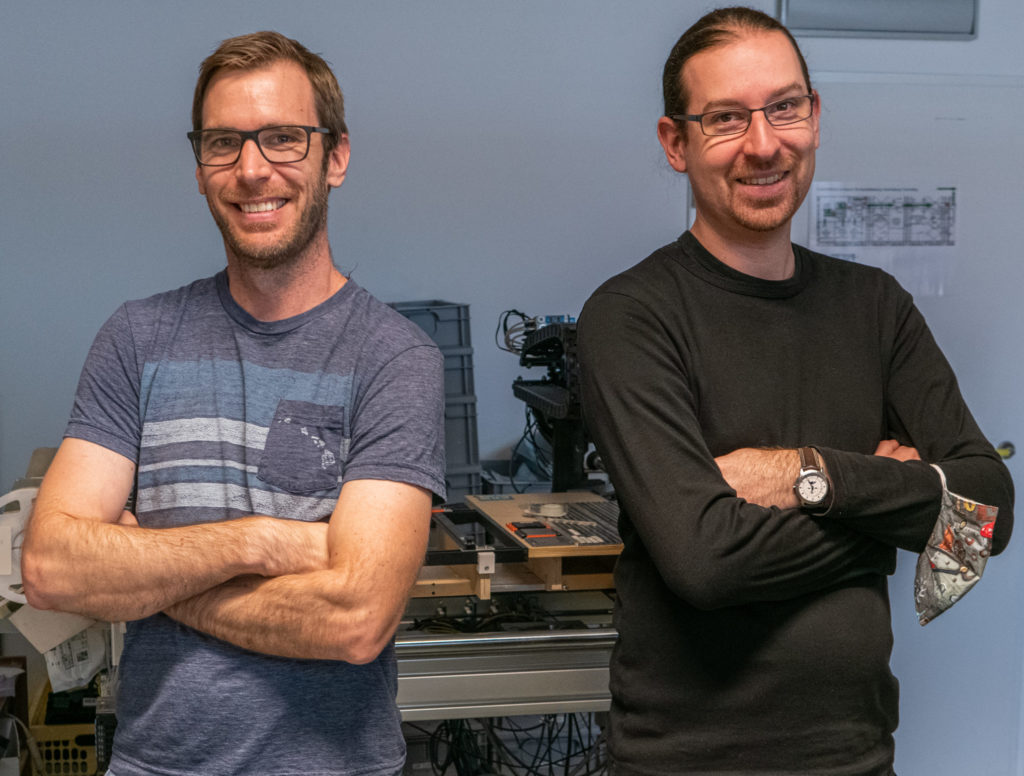 Cooperation between Amescon and Apertus

Cooperation between Amescon and apertus°

Two hub members Amescon and apertus° have built a machine in a long lasting collaboration project, which goes beyond their normal startup work.

We met Daniel Amesberger owner of Amscon and Sebastian leader of the apertus° project to talk about their machine building efforts.

How did you start this project?

7 years ago I had the idea for a self built pick and place machine for the first time. Because in the price segment that I was able to afford nothing really usable for
production was available. Pick and Place machines were either created by
hobbyists with low accuracy and missing functionality or they were full fledged
industrial solutions with a very high price tag.

We design and produce a lot of different hardware and we have very small components everywhere, but we still built everything by hand at that time! So the natural requirement for us was to automate this and start placing the components with a machine! Going for a do-it-yourself approach is a rewarding challenge by itself but also catered perfectly towards a better hardware production solution. It
also meant a certain degree of independence if we build and therefore know the
machine inside out. We met Daniel through the Factory Hub contacts and
therefore discovered we have similar goals and needs.

How did you approach the project?

First we tried to get an overview of the existing systems and boiled our requirements down to the core features we really needed. We looked for an optimal solution that is inexpensive and provides some of the industrial machines features and precision. We also had to make compromises.

How did the cooperation with apertus° come about?

In the beginning, the software I developed that controls the pick and place machine was tailored to my particular requirements. I got to know the people from apertus° about 5 years ago and they had the same problem for hardware assembly. They started to modify the machine and control to use an established open source pick and place software called OpenPnp – several software additions and improvements were done that were also committed back upstream for other OpenPnP users.

How was the work on the machine organized?

That grew naturally, we did not plan ahead very far. Each step simply arose out of
current necessity. In this case, there was no real need for a long term plan
because there was no commercialization behind it. The only goal was to have
“our” machine that we can use to produce hardware.

We worked on the machine independently from each and sometimes more sometimes less! so it grew from week to week.

Where is the project today?

Small PCB assembly
batches have been produced with the machine. My last run was 50 pieces.

At the moment, we
are in the process of upgrading some components, better camera and a second
pick and place head for example.

We hope that everything goes smoothly with the planned production run at Tele, but for smaller quantities and also for prototypes we will still use the self-built machine and therefore we also want to develop it further. Some mechanical elements are 3D printed currently but we plan to replace them by CNC milled aluminum parts for example to improve accuracy.

Thanks a lot Daniel and Sebastian for the exciting insights.

Well, there is still a lot to be done on the machine, but it’s great seeing what is possible in a place where creative minds approach problems with curiosity and solve them with competence.

This A-Team gets the triple AAA rating for collaboration and creativity.

Met by chance – brought together by a common problem – connected by a shared space.